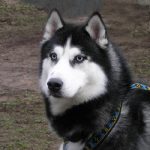 In 2004 when we’ve let our only son to go to LIFE, just as “Nemo’s Fish “, we’ve started to think about the greater animal than a cat and fishes. We had read descriptions of breed SIBERIAN, visited shows and searched for a dog who at first sight will force our hearts to haven’t more any doubts what is’t he.When I’ve seen the Siberian Husky’s puppy for the first time, without any knowledge as look sthe adult dog, in our hearts was born the big imagination to this breed. And the more we found information, the more we’re sure Siberian Husky – is that dog which we look. We’ve waited for our first Siberian pup, since his mother started carrying him under her heart and since the day of his birth we saw him growing, developing and getting more beautiful, stronger, smart male who has obedient temper.

His name was Shaffron. Shaffron – was really a serious dog. When Shaffron would meet a new person, he would look into his behaviour very smartly. After that he used to decide if the person is noteworthy or not. Shaffron was always ready to take an action. He was really happy when he used to work for the welfare of his pack. Shaffron’s usual position was at the back of the dog sled team (so he would pull the biggest part of the weight), though if he had to replace the lead dog, he was quite good at it too. Shaffron was able to divide the amount of his energy equally. Shaffron wanted to make everyone and everything around him feel good. So he hated the dog-shows, because there was so much tension in the air. Shaffron was a very careful dog and when he was going to cross the road, he would look out for cars too.